Madhangeeswarar Temple is dedicated to Hindu God Shiva and located near kanchipuram busstand. This temple was built by Pallavas in the year of 800-900 AD. The architecture of this temple is same as Kailasanathar temple. The size was almost same like Jvarahareshwarar Temple. It has 8 lion pillars each carved out of single stone. This temple is maintained by Archeological Survey of India (ASI). 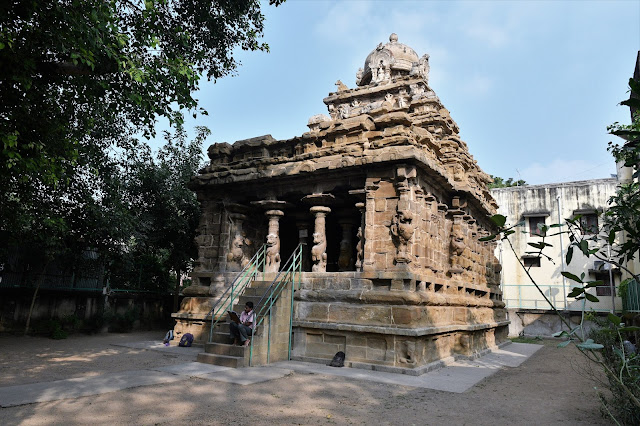 Gajasurasamhara icon is popular in Pallava and Chola art, which portray him dancing vigorously in the flayed elephant hide of Gajasura.  In sculpture, Gajasurasamhara is often pictured with eight or sixteen arms. These multiple arms are uncommon in Shiva's iconography and are exclusively used in his combative forms. In such multiple-armed images, Shiva may carry various attributes like the trishula, a damaru, sword, kapala, pasha, deer, ankusha, vajra, arrow, gada, khatavanga, tanka, bow, snake, the elephant's tusk and akshamala. His hands may be held in suchihasta mudra or vismaya mudra.
According to Hindu scriptures, Ravana once tried to lift Mount Kailash, but Shiva pushed the mountain into place and trapped Ravana beneath it. For a thousand years, the imprisoned Ravana sang hymns in praise of Shiva, who finally blessed him and granted him an invincible sword or a powerful linga to worship.
The legend also boasts of Lord Shiva emerging victorious in the dance duel with the competing Goddess Parvati by lifting His feet high up in a posture called the Urdhva Thandava, an out and out male gesture. The goddess demurely bowed down to the Lord of not being able to perform the pose. The dance was an outcome of the couple's teasing of one another during their amorous arguments. However, a variation in the story narrates about the dance between Lord Shiva and Goddess Kali.
Posted by Sivaraj Mathi (சிவராஜ் மதி) at 6:54 PM No comments: Links to this post

Mamandur is known for 7th century rock cut temples, one of the monuments of national importance as declared by the ASI.  It is located on Kanchipuram-Vandavasi road. There are four caves in the complex, numbered from north to south.  We can reach the cave complex from either Paachai amman temple or Narasapalayam road.

We parked our car in paachai amman temple and started from cave 1 to 4.

This is the north most cave temple among the group of four such temples. This simple rock-cut shrine faces east and its base is about four feet above the ground. There are no steps out of the original rock; hence a separate staircase was constructed. Its façade is supported on two pillars and two pilasters. The pillars are executed in the characteristics Mahendra style. 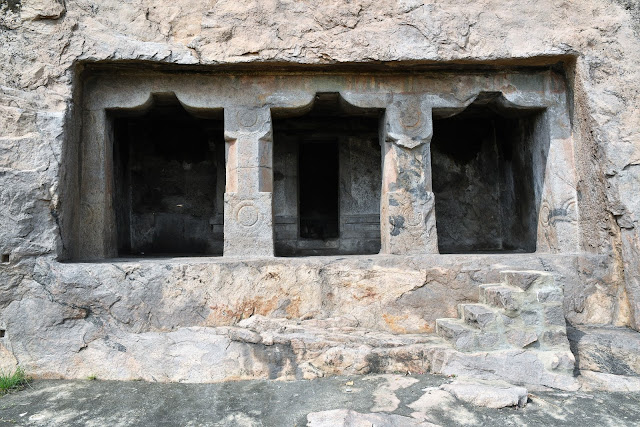 Situated south of the first cave, also has an ardha mandapa and mukha mandapa separated by two pillars behind the first row. There are three sanctum sanctorum in this cave temple, dedicated Brahma, Shiva and Vishnu. Two steps in front, with a low stone rail shaped like the back of an elephant lead into each garba griha.
According to an inscription inside the central sanctum, it is called Uruttiravalisvaram (Rudravalisvaram). Thus Shiva or Rudra would have been the deity of the central sanctum. The dvaarapalas of the central sanctum stand in tribhanga, one hand on the waist and another resting on their heavy clubs which are intertwined with serpents, wearing huge jatabhaaras on their heads, yajnopavita (sacred thread) and ornaments. The Linga in the sanctum indicates that this garba griha was dedicated to Shiva. 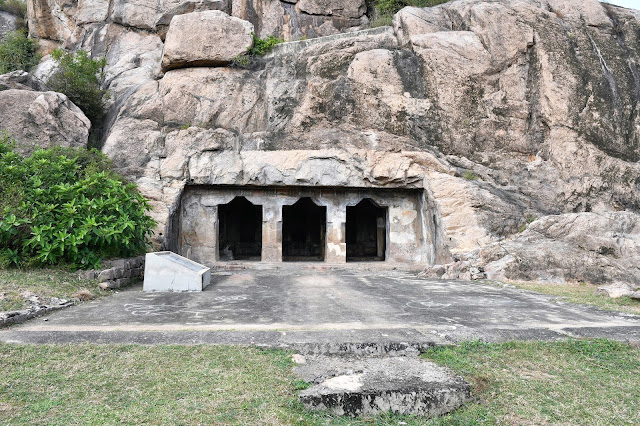 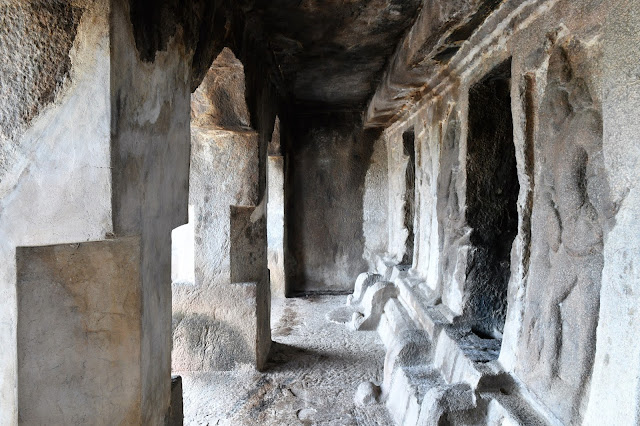 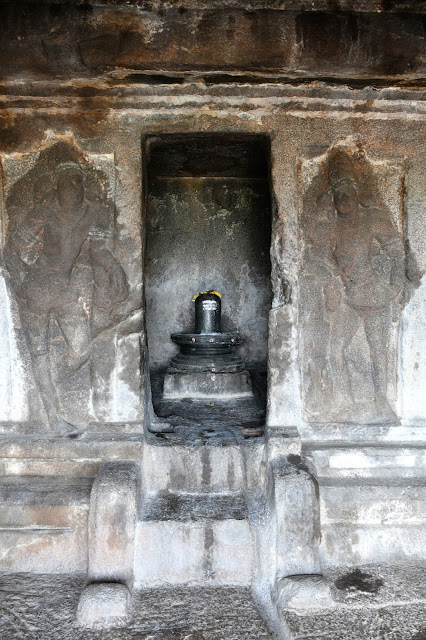 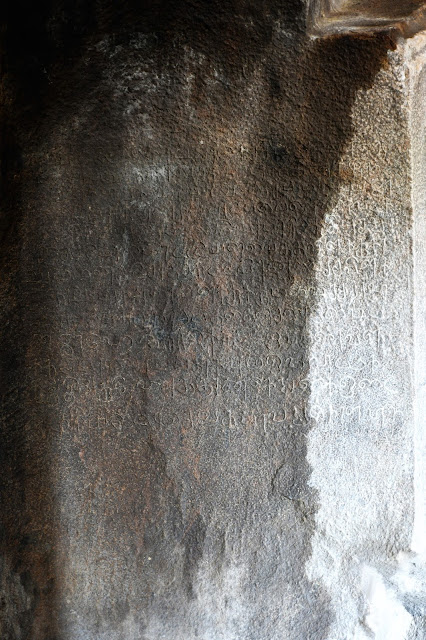 The dvaarapalas of the southern sanctum stand in tribhanga, with a hand on the waist and a lotus in the other. Wearing a yajnopavita and jatabhaara on their heads, they were obviously intended to be sages or braahmanas, and the deity within must have been Brahma. 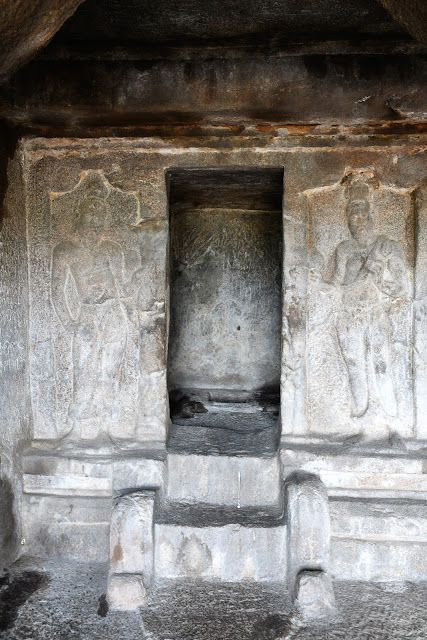 Cave 3:
Situated south of the previous cave, this is the largest of the four caves. There are several cracks on the pillars, which may be the reason for not finishing this cave. There are five pillars and two pilasters on the façade, in typical Mahendravarman style. The corbel above the pillars is in curved profile. The southern façade has two pillars and two pilasters. Corbels are finished above the pillars, however these are not fully cut in to make the space for circumambulation. This cave has an ardha-mandapa and mukha-mandapa, the two differentiated by two rows of pillars and pilasters.
The five shrines at the back of the cave share a common platform, with staircases in front of each, consisting of three steps. The cells are all cubical and empty, with no dvarpalas or inscriptions. This shrine would have had seven cells, five on the back and two on the side. 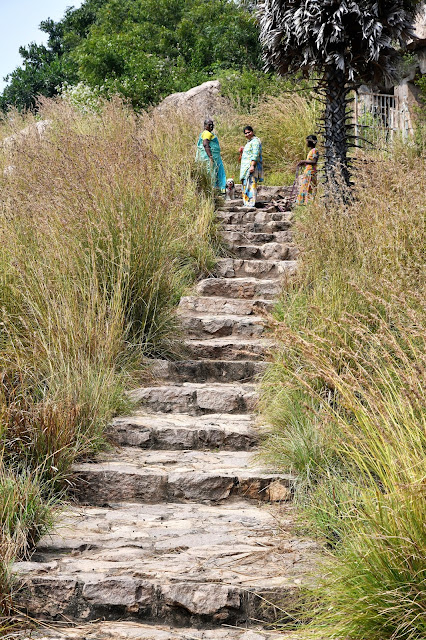 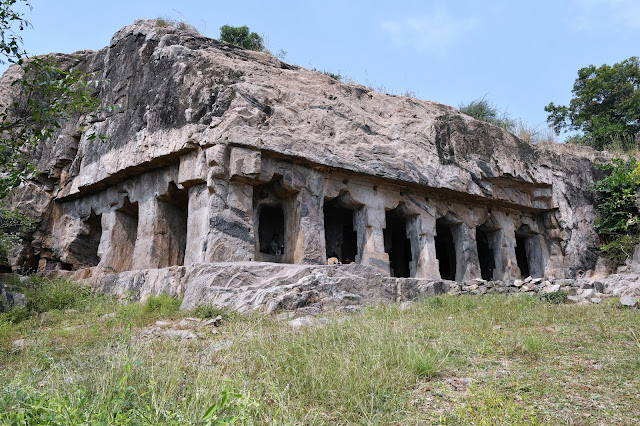 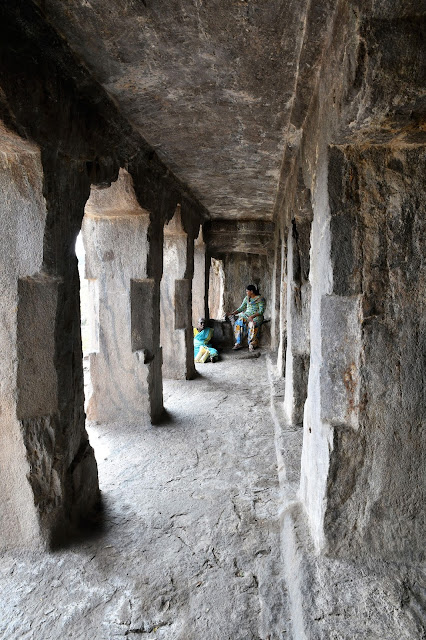 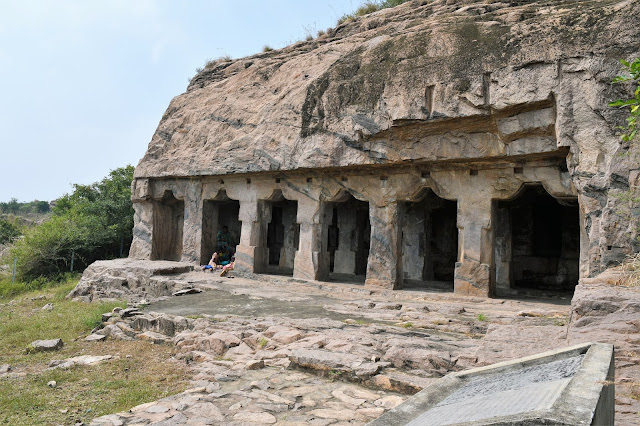 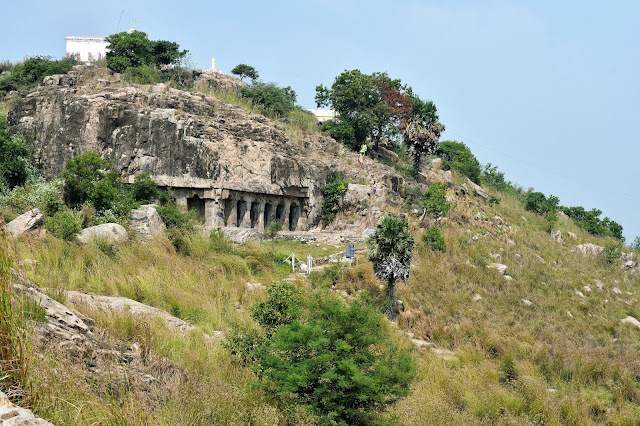 Cave 4:
This is the smallest cave on the hill, unfinished, with a façade of two pillars and two pilasters. The façade suggests a three shrine cave, but the work was stopped due to cracks in the rock and load above the roof. 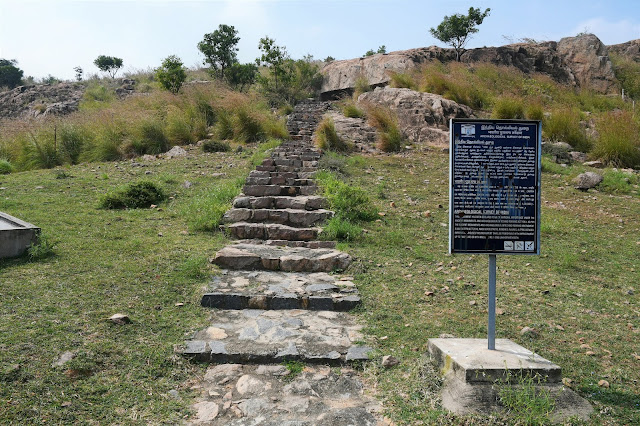 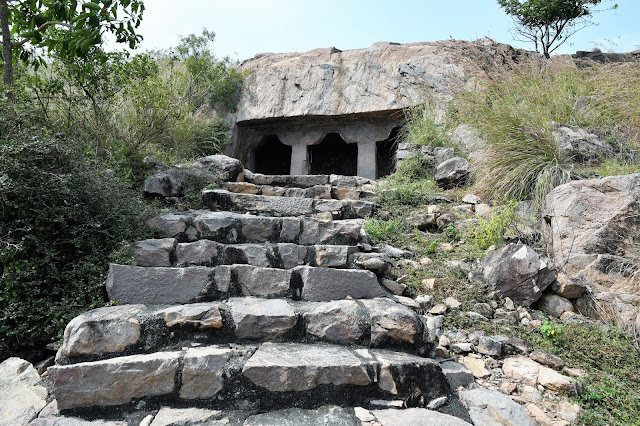 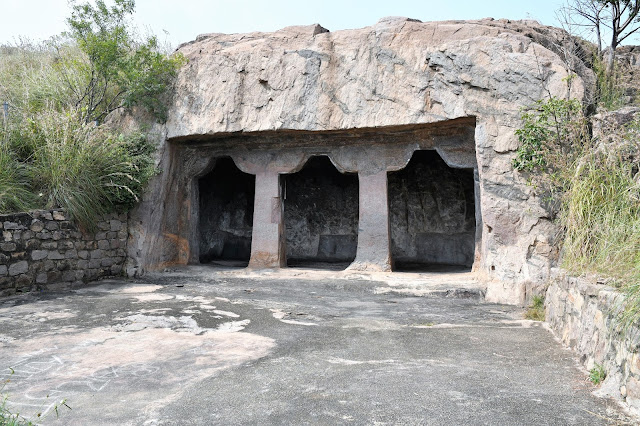 Posted by Sivaraj Mathi (சிவராஜ் மதி) at 10:24 AM No comments: Links to this post 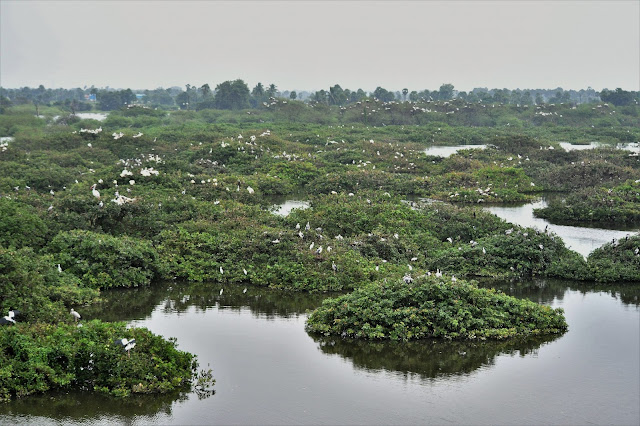 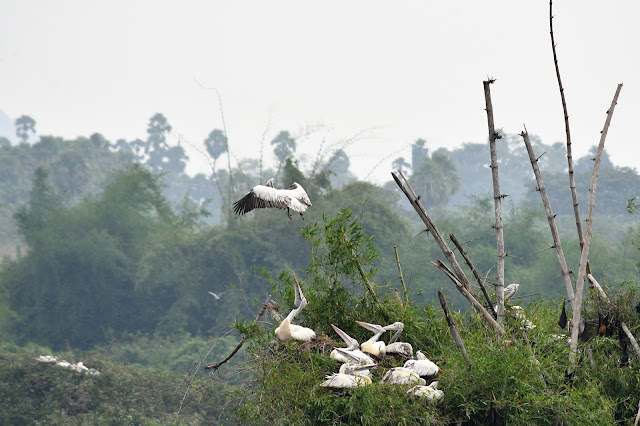 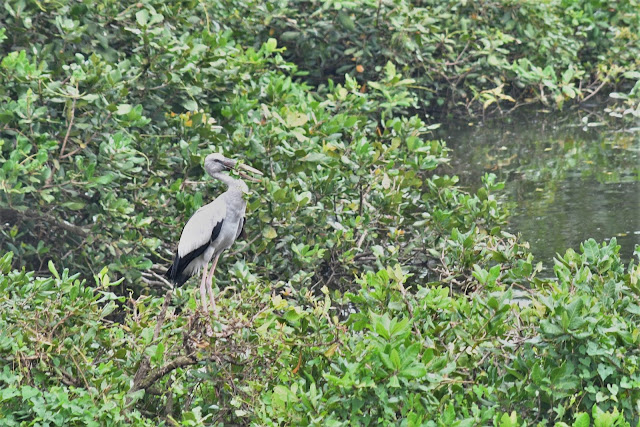 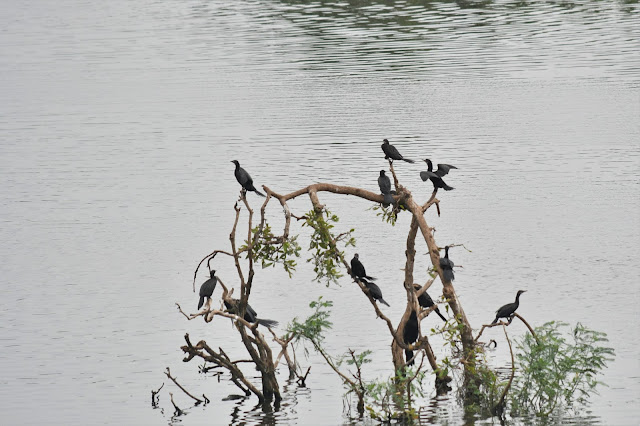 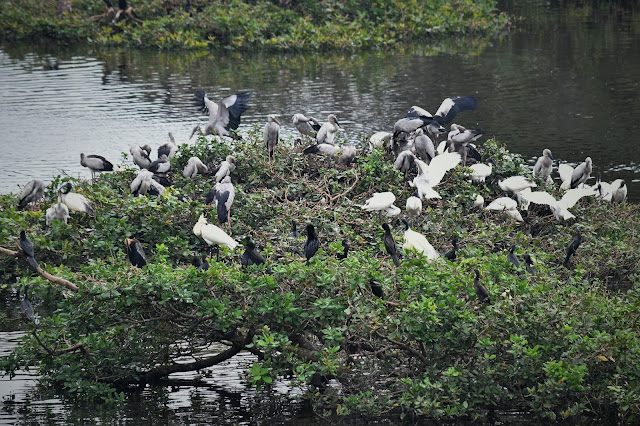 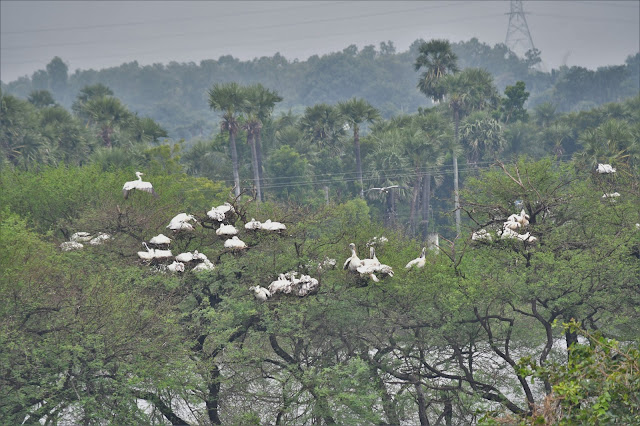 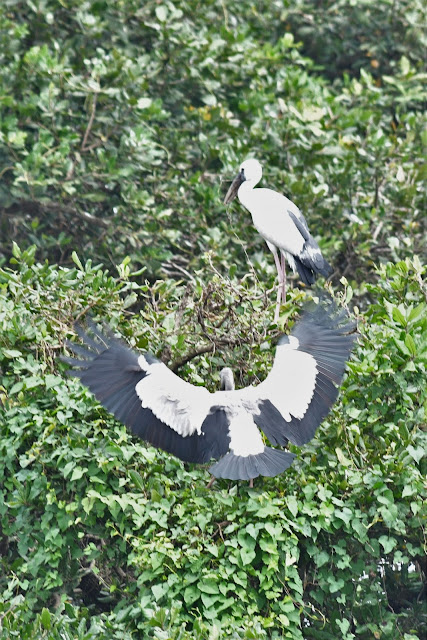 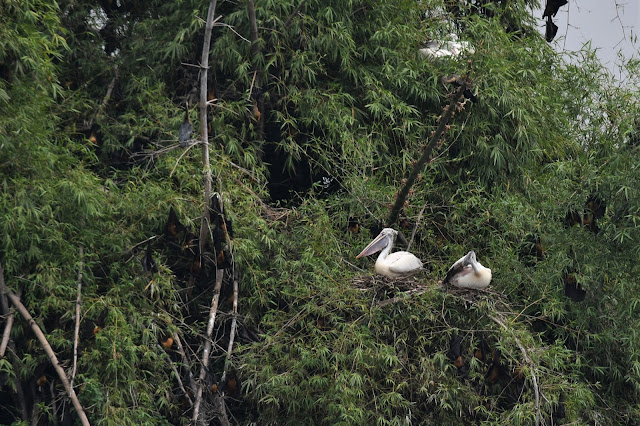 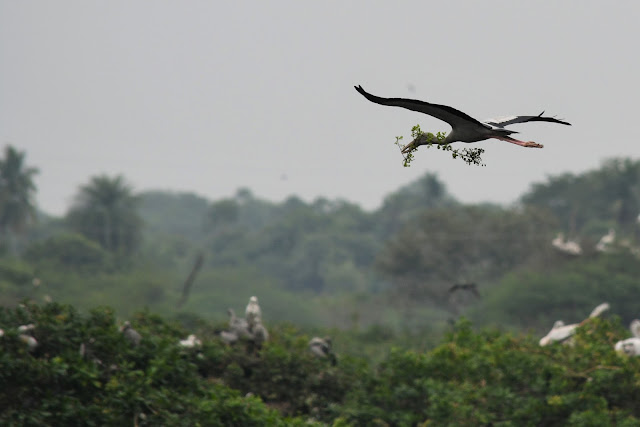 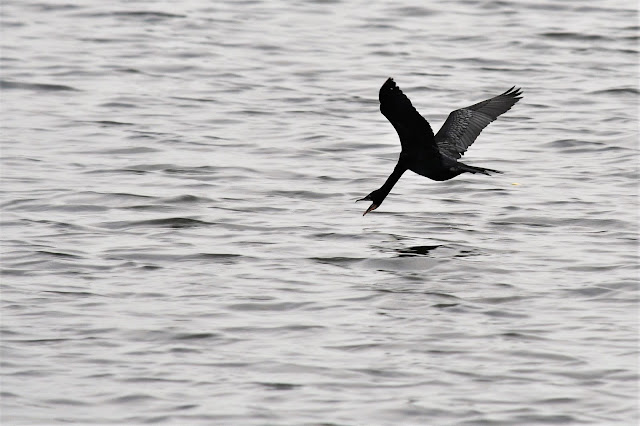 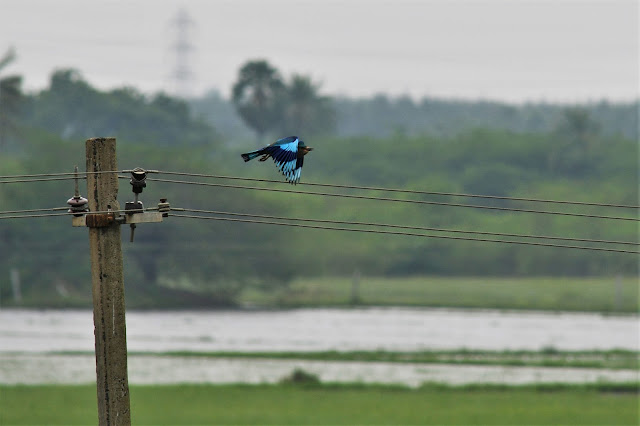 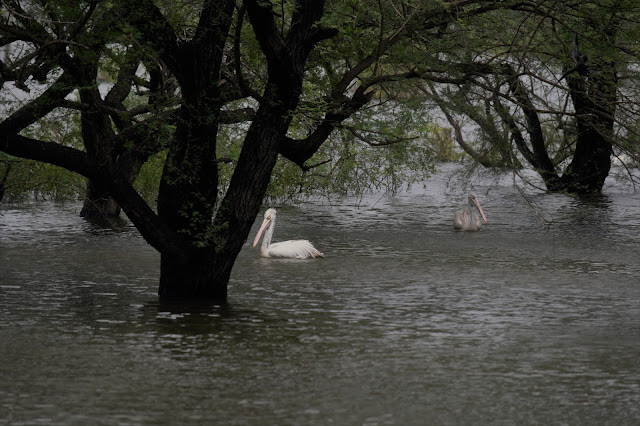 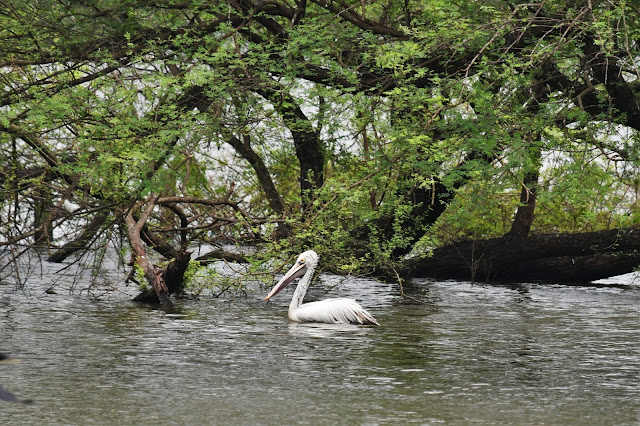