Reporting day: Our trek started from sonamarg, couple of hours drive from Srinagar on national highway 1D, we met all the co Trekkers at Srinagar tourist reception center and left to base camp arranged by indiahikes, around 5pm we have reached the base camp, it was at 9000feet altitude on a small hill surrounded by snow cap mountains and sindh river was flowing in the down, met our trek leads vikranth, kunthal and tippu, who gave basic info about the trek route, schedule and safety tips. To our trek leads surprise our whole batch assembled well before the sun set, according to them it was quite unusual.
Sonamarg to Nichani (Day 1, 11km): We started our hike around 8AM, trail goes ascend straight away, after 30mins the trail goes into alpine and maple trees, we crossed an army camp and few shepherds houses, seeing us Major Avinash from the army camp joined us for a small chat and walk, who came all the way down to our camp last evening for chit chat. He shared his views on kashmir, its beauty and why the camp is required at this place. Another half an hour under trees to resting point, by that time everyone got to know about others pace, who are all front runners and medium pacers. Time came to say goodbye to cell phone network, electricity and trees too, just before the lunch point territory of trees ended, after that it was too sunny and hot. This was not the climate we expected, whenever i think of kashmir only white snow come to my mind, we were expecting it would rain and came prepared heavily for that but situation was opposite sun was putting in a straw and sucking the water from our bodies, thank god our lunch point was next to stream, which gave us a breather, spent sometime near the stream and started the final stretch of day 1. Problem of the day was hot sun, it drained us almost. Our first day campsite was at bottom of the nichanai pass. We have covered 11kms and gained 3000ft altitude. 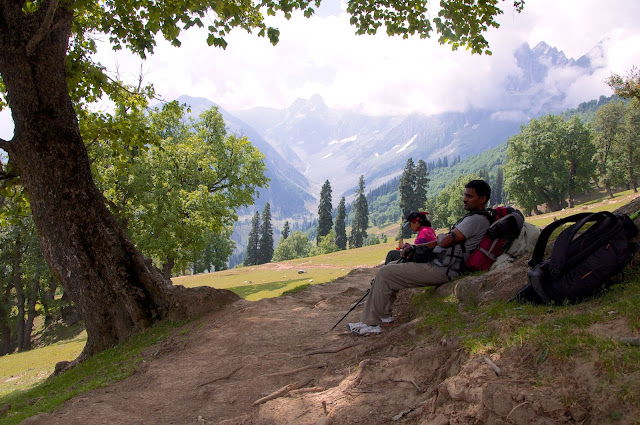 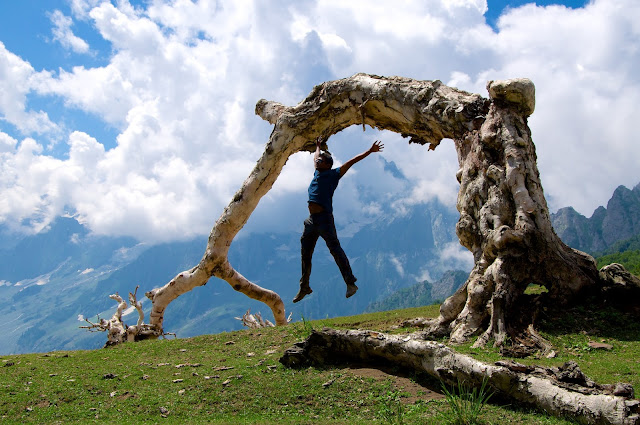 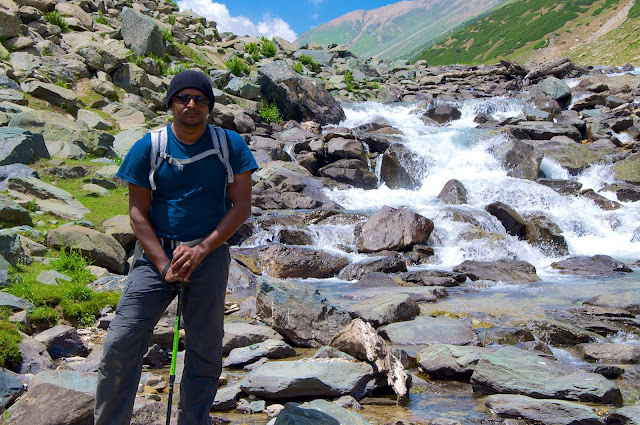 Nichanai to Vishansar Lake (Day 2, 11kms): We are started the day at 7:30AM bit earlier than last day, since everyone got up early and ready to go except for the front runners since they can start late and still catch us up. First we crossed a stream coming from top of nichnai pass and started climbing to nichnai pass. It was the first pass of the trek, it was very steep at end, by the time we reached 80% of the climb, front runners crossed us and reached the top and started cheering for us to walk fast, to be honest crazies. After 90mins from the start i was at the top of nichnai pass, which at 13500feet altitude. Spent sometime at the pass, admired the nature, waited for everyone to gather and started to descend, on our way down we got a glimpse of flowers and what is meadows. Usually day starts at 6AM and ends at around 8PM, feels really hot under sunshine and feels cold under shades of clouds even in the afternoon, so everyday our trek starts with jacket, full pant, monkey cap as day progress we will lose them one by one and walk with bare minimum dress. 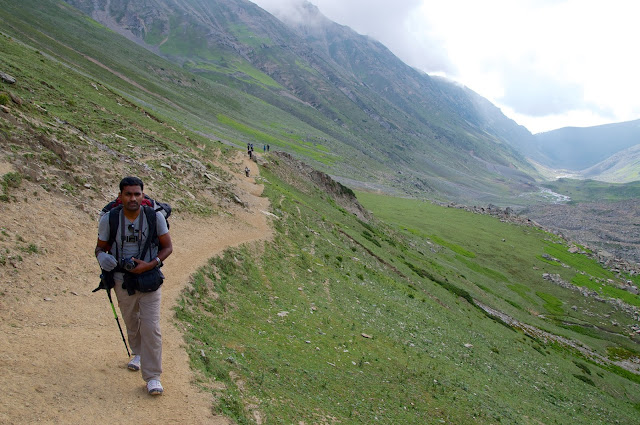 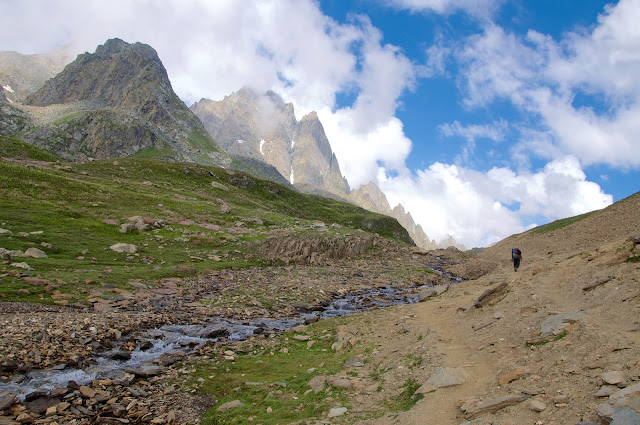 Most eventful day, away from alpines, flower land, crossed nichnai pass, followed by full grass land with flowers, some of them we saw in Valley of Flowers and some new flowers, our first lake of the trip, I must say we were awestruck by beauty, we took bath in the lake which is at 12Kfeet altitude, followed by cricket in the meadows. 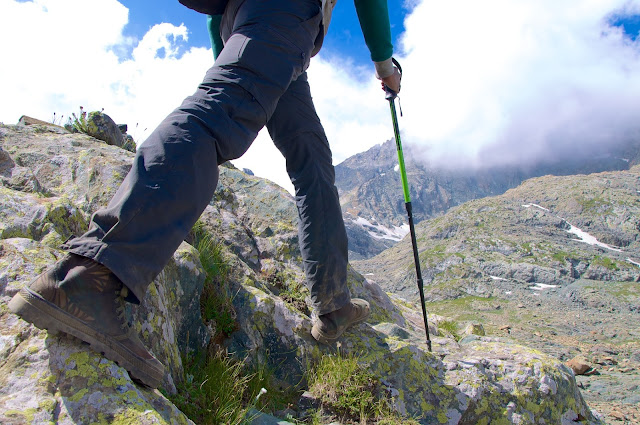 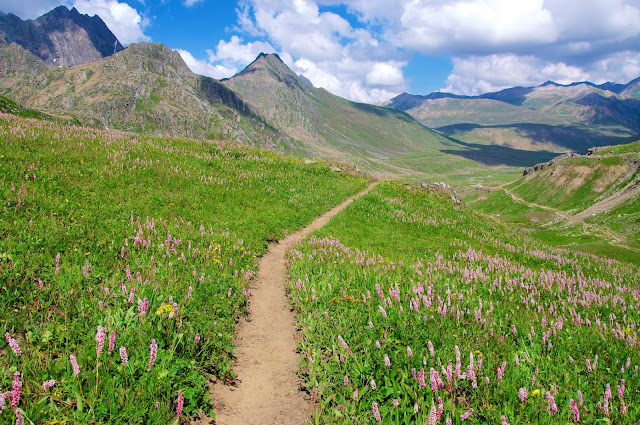 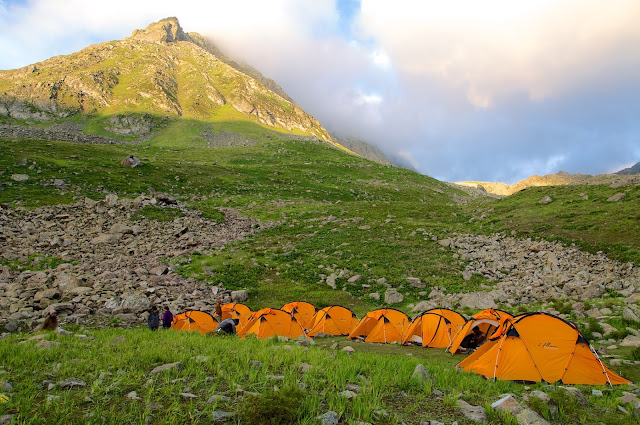 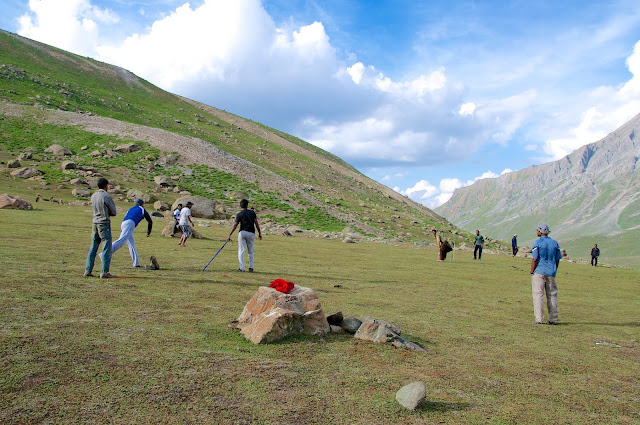 The most awesome part came after the sunset,  we could see stars demon lake everywhere in the sky, to our favour there was no clouds and new moon day was near,  every pointing the constellation they knew,  milkyway galaxy band was clearly visible,  we spent sometime capturing it inspite of cold breeze.
http://www.mapmyhike.com/routes/view/266464101 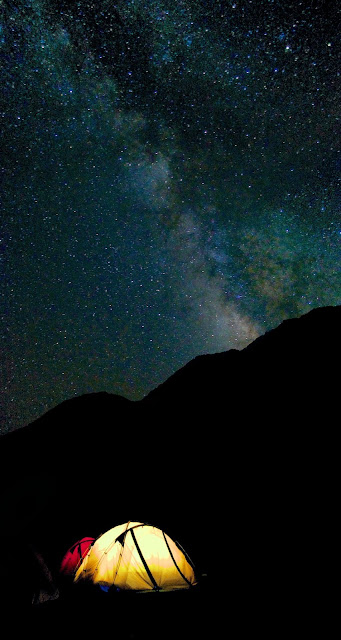