Story about lord Krishna captured in one of the frieze in the Lakshminarasima temple at Nuggehalli, Hassan.  Initially this temple was built for 'Jayagondeshwara' by chola king to which hoysala king Vishnuvaradhana gave some grants.  Legends depicts that to west of the present temple a saint by name Rushbha, performed penance & pleased with his devotion Lord Lakshmi Narasimha manifested himself & blessed him.  The temple is generally known as the Lakshminarashima temple though the main god is Keshava.  It is located near Channarayapatana.

This temple has frieze just like other hoysala temples,  it has 6 frieze.  Elephant frieze at the bottom most, horsemen, scroll, mythological, makara and swan frieze at the top.   Here mythological frieze explains about the life of krishna from born till battle with Kamsa,  some of the parts were buried under the later front extension and some of the other sculptures are damaged/not in good shape.  Following are some of the scenes from kirshna history i could gather.

One day krishna eats clay while playing with friends,  his friends went and complaint to yasodha about this,  yasodha asks krishna to open his mouth to check.  Yasodha sees the whole universe in krishna mouth,  krishna says mother it is your imagination because of motherly affection.  For every mother her child is everything and her whole universe is her child. 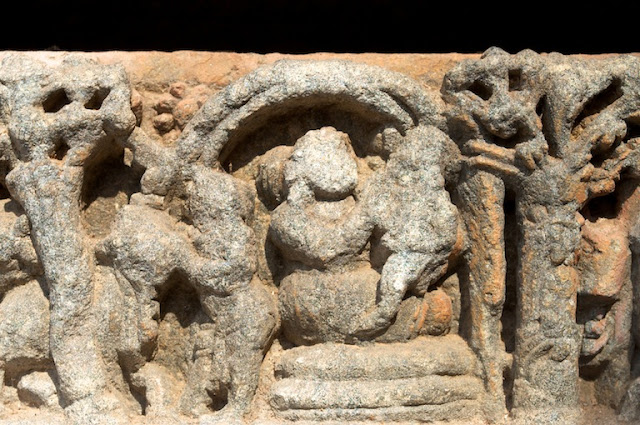 Krishna getting rocked in the cradle 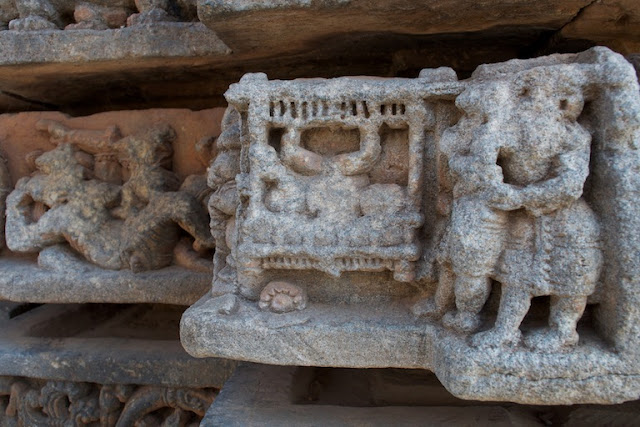 Once krishna broke a butter pot and started taking butter out of it and eating it,  yasodha got angry by seeing the broken butter pot,  she wanted to teach a lesson to krishna,  she tied him to the grinding mortar  nearby and went,  neighbors were making more butters,  which tempted krishna and he ran towards them dragging the grinding mortar,  there was a twin tree between which krishna easily passed but the grinding mortar stuck.  In this sculpture it is explained beautifully,  one end of the thread tied to krishna in four legs which shows krishna is still a toddler, other end is tied to the grinding mortar and the thread passes between twin trees to show that the mortar is stuck and could not pass through the gap between trees. 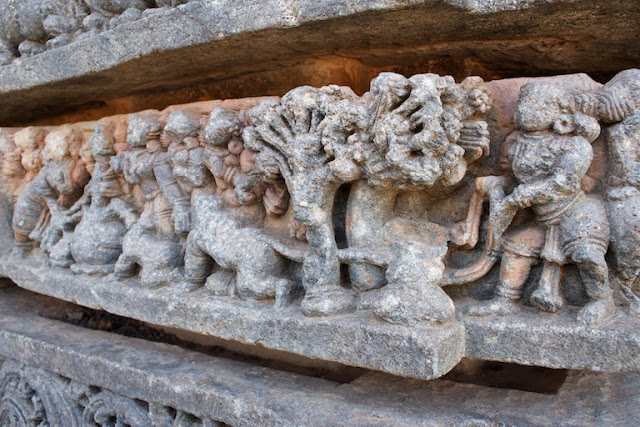 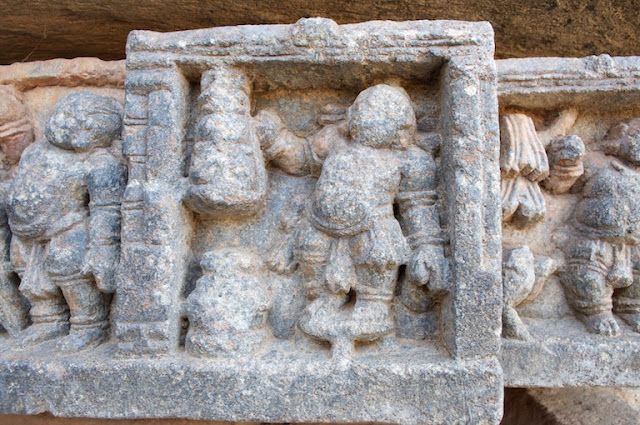 
Lord Indra could do what he intended to with torrential rains,  he calls back the rain and surrender himself to Krishna.  Following that Krishna plays flute in victory joy and brindhavan people celebrates the victory and dances for Krishna's flute. 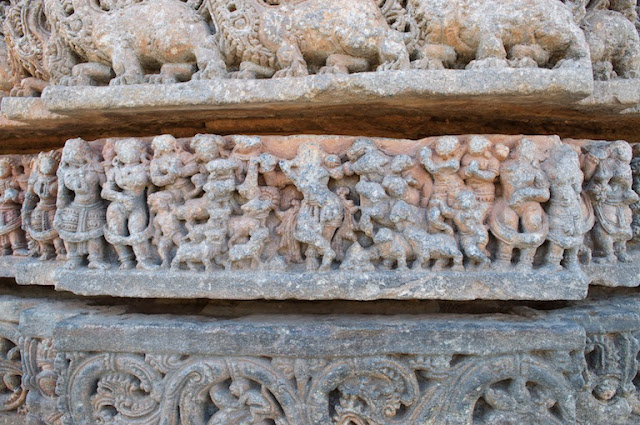 Mythical sala fighting with lion to save his Jain guru Sudatta.  Symbol of hoysala empire.  The word "strike" literally translates to "hoy" in Old Kannada, hence the name "Hoy-sala".  There is another version says the animal sala fighting in not lion it is tiger,  the symbol of Chola.   Story behind this statue is still folklore. 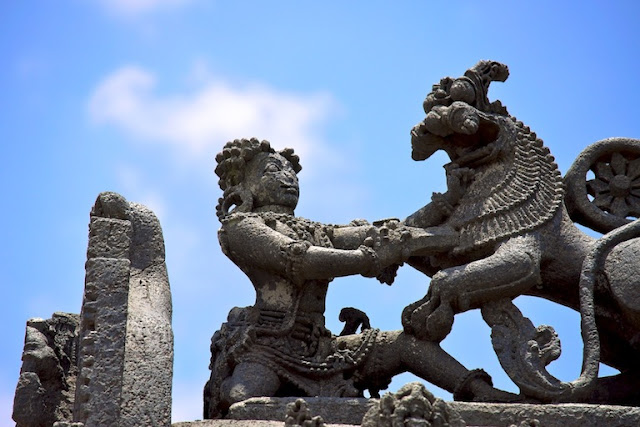 Wise Rama is firing an arraw at Vali from behind, while Vali is battling with his brother Sukrivan. Injured Vali asked 'I was fighting with some other person and was not careful enough when you shot me', Ram's Reply: 'how great kings did hunting of deers in the past. In fact, Vali in principle could also be kept in the category of deers and a hunting king does not care whether the deer was careful or not'.  How wise Rama is?

Details were sculptured so sharply in this one, cutting mark of arrow on the trees, Vali and Sukrivan battle and ram's position from them so finely explained. 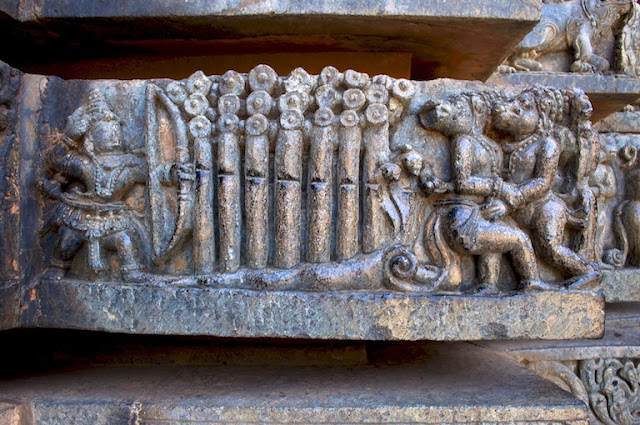 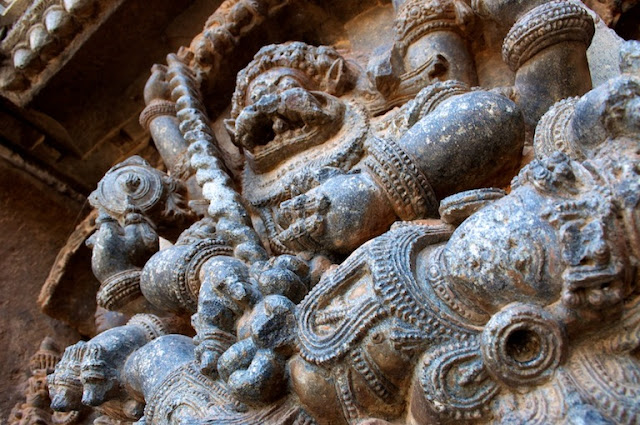 Posted by Sivaraj Mathi (சிவராஜ் மதி) at 3:01 PM No comments: