Aug 12th: Myself, Ananad anna and Bharani met fellow trekkers at the haridwar railway station in the morning and started to Govindghat in a cab arranged by indiahikes,  our group was around 30 people,  no wonder why so many people inspired to go.  8AM we kicked off the day,  recently there were heavy rains in chamoli area and roads were closed for few days and opened recently,  right after Rishikesh the road gets its beauty, the road follow the path of ganga, yeah most of the destinations are to one of the ganga starting place, so simply follow ganga to reach the destination.  Start to end was with full of breathtaking valley views, some landslides and not to forget the green blanket  all over the mountains due to recent rains.  Around 7PM we have reached Govindghat, met our trek leader Dhinesh and his team Mahi and Vishwanath, before conclude the day we received some info about the trek, instruction on how to be safe on the way.
Aug 13th: Morning started our trek to ghangaria from gurudwara at govindghat after our final and important purchase walking stick, it is advised to carry a good hiking pole but you know our mentality right :)  Since ghangaria is also midway to Hemkund we had lot of hemkund pilgrim enroute to ghangaria, there were lot of tuck shops on the way to munch and regain energy, even some of the pilgrims were offering glucose and chocolates, trekking is not only the option to reach to reach ghangaria but most prefered and enjoyable one,  the other once are ponny, small kids were carried in the baskets and frequent helicopter shuttle between govindghat to ghangaria. This trek route goes along side of alaknanda, it is one of the headstream for ganga,  stream sound cheers you throughout the trek,  cleanliness on the path is to be appreciated even though so much of ponny goes by still it is maintained neatly by volunteers, don’t hesitate to offer some to them.  After 1PM climate started changing dramatically, it was full sunshine day so far, then only we realised we were supposed to reach ghangaria by 1PM because rains were expected in the afternoon but we totally forgot and spend time at the streams and falls.   All fun over even there is no views, clouds already closed all of it, we started non stop walk to destination, just before 3 km to ghangaria the path switches from left side of river to right side, from here the trek got little tough,  path got little steep and rain was little heavy.  Since morning i’ve been looking some good little stream to take long exposure, i’ve not seen one since morning but that type came now, it was raining and we were late, still my bro insisted we will take,  we let bharani go and only we both stayed we shot what we want, thanks bro for the umbrella cover :)  After all those crazy things we have reached ghangaria at 5PM.  We were behind the schedule but where's the fun if we don’t get to spend time at beautiful places. Vishwanath already reached ghangaria,arranged our stay and dinner in one hotel.  Day 1, we have covered 13km  and gained 4000 feet altitude. 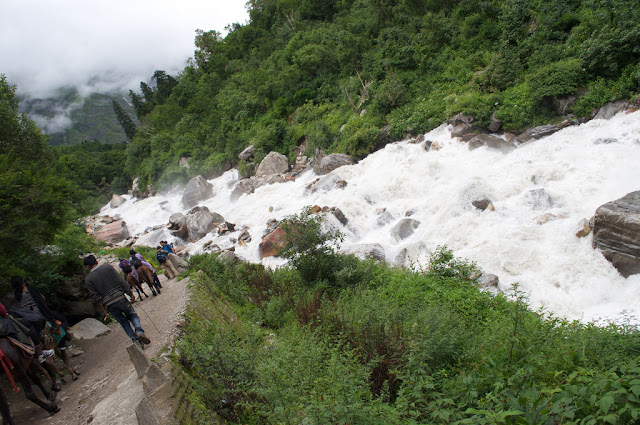 14th:  Most awaited day of the trip, according our schedule we are supposed to go to natural wonderland Valley of Flowers, VoF is natural botanical garden with valley full of flowers with more than 500 species,  the valley is covered in snow for most of the year, it opens itself only from june to october, july mid to august mid being the best season with little bit of risk factors like rain and landslides, during this time weather is 100% unpredictable, even the same threat applies in reaching govind ghat from haridwar, we believed in our luck and decided to go in august mid, so far the weather acted like a good friend to us but lately behaving otherwise, over the night it was full pouring, dhinesh was not sure of the condition of VoF trail, he had already sent someone to check on the condition, if otherwise we will go to hemkund and try our luck next day stating if it continues rains we may not get good visibility of the valley.  We all kept our hopes on high and waited for the rain to stop, probably i would not have done that in bangalore this year. 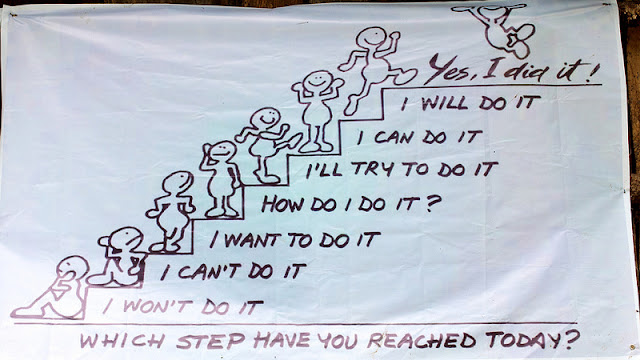 By 6:30 rain stopped completely and clear blue sky welcomed us to the VoF,  from the entrance trail goes for more than 10kms, we planned to reach as much as possible by mid day and return.  For first 3 kms we could find some new flowers sparsely scattered then came the butterfly trail, both the sides with full of pink flowers,  slowly mist also started flowing in the valley, nice feeling it was.  Before we went to VoF, i’ve searched for videos of the valley mainly timelapse,  yeah timelapse is one of my fav. technique, it shows something happening in front of the eyes in different angle, even eyes can’t catch that but i’ve not found much so i thought of making some during my trip,  butterfly trail, people and mist looked awesome choice for it,  i climbed on a rock to get the full view and took my first video, then we crossed a glacier, we got glimpse of full valley from that point.  We crossed the valley bit by bit, every 100/200m we found a new flower, we started to return back at 1PM sticking to plan,  we could have reached 6 kms before our return.  Best things about the day are blue poppy, pink flower(androsace porancllias), mist.  The most interesting and curious thing is valley contains 1000s of 1000s of flowers but none of them have aroma absolutely no aroma,  the whole places is very colorful but sometimes it makes you think are the flowers real?

If we get of the trail and walk inside then we can find different flowers and new angles, definitely one day is not enough to cover the whole trail and explore,  we need at least 3 days.  Hopefully indiahikes will conduct 3days or more days expedition trip to VoF in the future for enthusiasts.  Unlike ghangaria round there is pony in VoF.  Few trekkers missed the VoF due to illness and few were telling it is tough for them to climb hemkund.  We took a final count by dinner who all are want to trek, who are all going by pony and people who are going to VoF, finally it came to 9 people who wanted to hike to hemkund, we decided to start the as early as possible.

Aug 15th: Morning 6AM we started to climb the hemkund,  hemkund is 6 km from ghangaria and nearly 4000feet above ghangaria.  It was very steep climb,  we gradually started to climb with regular breaks.  As we go up and up, the places got more beautiful,  after 4 km we crossed a glacier and a falls which originates from the hemkund lake.   From that point we could see the full valley until now the path was covered with trees and the mountains was decorated with Bhrama kamal, it grows at 12K and above altitude only,  which gave us rough idea how much we have climbed so far.   The second hill decorator was blue poppy,  it is one of very beautiful and colorful flower on the valley,  we could see more blue poppies in hemkund than VoF.  Right after waterfalls, there was two ways, one is very steep & short and another one is long, laid mostly for ponies to go easily, we took the steep one, half through we saw the flag on gurudwara which boosted our energy by indicating destination not so far.  We have reached the top around 10:30AM, there are many things to be cheered for once reached the top, first  we have successfully reached the peak, the lake at 15K altitude and tea & kichidi served at the gurudwara :)   Hemkund was almost covered in cloud, we had no choice but to wait for the full view, meanwhile we decided to took the dip in the coldest hemkund lake,  yeah it was crazy yet amazing experience.   Climate was awesome,  clouds was moving very fast,  sometime with full of clouds sometimes full clear,  We spent sometime and started back. Next day morning we have started back to govind ghat and reached govind ghat around 12PM,  we refreshed and relaxed at the hotel arranged by indiahikes.   Our trek with indiahikes ended here with happy note.   Some of the fellow trekkers had plan to goto mana and badrinath like we had,  we grouped together and left to mana around 3PM.

Posted by Sivaraj Mathi (சிவராஜ் மதி) at 3:03 AM No comments: