I got a trek invite from Wild Wanderers Adventure Sports on facebook,  I was actually looking for some trek to kick of this monsoon, this looked good and accepted it, i know WW though Vikas, he also showed interest in the trek.  This is my first time trek with Wild Wanderers,  I was thrilled and awaited for the friday to come.
Friday evening i've joined the wild wanderers at MG Road, we have collected other fellows from different pickup points and started to chikmagalur,  Saturday morning around 7AM we have reached chikmagalur town,  we freshened up and had breakfast in the town and started to base.  Our initial plan was to start from Manikadhara -> Devirammana betta -> Manikadhara -> Bababuddangiri -> Mullayanagiri but most the people wanted to start from Sarpathari to Mullayanagiri, so the whole plan is reversed and sarpathari is also added to list.  The best about the organizers is that they changes the plans according the group, which gives a feel like we are not going in some package trip instead friends organized trip,  in the whole group only 4 are new to the WW,  rest of them already trekked together before, overall we were 18 people group. 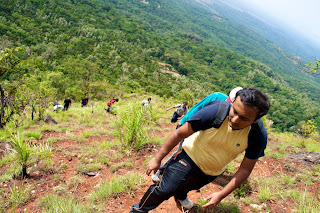 Around 10AM we have started from Sarpathari gate to Mullayanagiri top,  Mullayanagiri is the highest peak in Karnataka,  I've climbed this peak once in 2009 from the same point, so i know it is bit difficult but can be done,  hardly after 15 mins of start, i started feeling vomiting sense and i was not able to walk a bit, probably because of ghats drive or my body is not used to breakfast and all of a sudden i ate breakfast and started to trek,  i was slowing the group speed, so Vikas, chandu and prashanth stayed with me and rest moved forward,  until the whole breakfast came out i almost lost the confidence that i can finish the trek but Chandu and Prashanth was very friendly and trying to motivate and divert the topic to get the confidence back,  they literally pushed me to walk bit by bit, by the time i got rid of the vomiting feeling and we have almost reached the top and not far behind the group, at one point i thought of abandon the trek and go back to town, atleast others will do the trek on time, thanks to those three who walked slowly with me and pushed me up.

Temperature at chikmagalur was around 30 deg and so is at the Sarpathari, but half through the peak it started cooling down,  at the top it was very pleasant,  it was covered with mist even at around noon, it was so refreshing,  we took a break at the top,  We all filled our water bottles at the temple in the top,  naturally cooled water.   I have recollected all my energy after the bad start and got ready for the ridge walk to Baba budan giri. Chandu once said the idea of starting club came while on trekking in Mullayanagiri, it is a memorable place for WW founders.

Ridge walk towards Babu budan giri was little long but not that much tiring,  views from the ridge was amazing,  a relaxed walk along the ridge seeing both mountains and plains,   Just before blade walk we took the lunch break,  had the thepla we carried for lunch.   Thepla remained me of my cousins and my first encounter of thelpa during my cousin marriage. 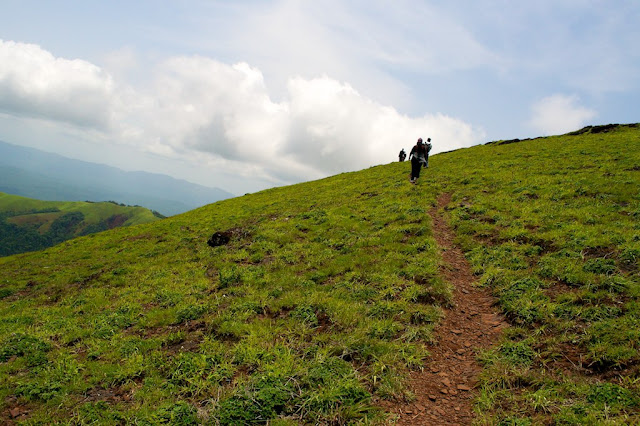 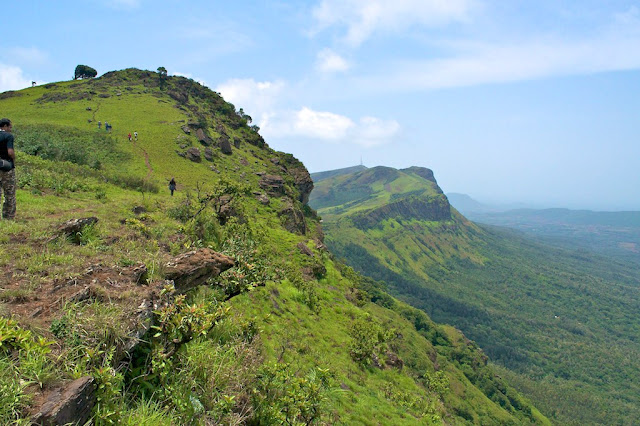 After lunch we started to the blade walk,  blade walk is little tough and risky so we need to get permission before in hand for trekking, there is a check post just in front of the starting point,  so we can't enter with out being noticed, we went as part of registered adventure club, we have signed wavers before the trip and our guys speaking skills got us the permission to trek in the blade walk.   It took some half an hour to the complete stretch, it has only few feet wide to walk for and both sides are very steep, especially the one on the plains side,  one of the highlight of the trip is blade walk, some places gave very adventures views and experience. 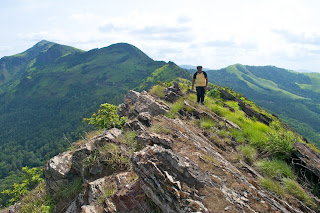 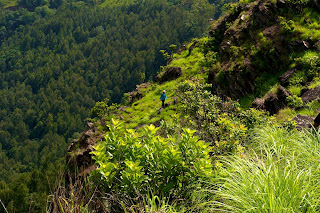 Right after the blade walk, few of us were tired, we were looking for the ending point of today's trek, someone said hill with the satellite tower is Baba budan giri, we looked for it only one tower was visible, we have finalized the target and started the walk, by look it is just behind the hill in front of us,  we have walked little fast as the ending point is near,  once we climbed the hill, still the tower is at same distance behind one more hill, ok climbed that too, still the tower is far away but atleast we were able to confirm it just two hills away.   We took a small break and continued to our day 1 final point, we have reached the tower at around 5:30, mist also started coming down,  slowly the mist is covering the tower from top.

Our second day itinerary is to go to deviramma betta peak,  so we have decided to camp near manikyadhara falls, luckily there were some small shops opened were we can have tea and bread omelet,  generally they close by sunset since we camped near by the shop they opened it till night and they agreed to open in the early morning before we start our trek. 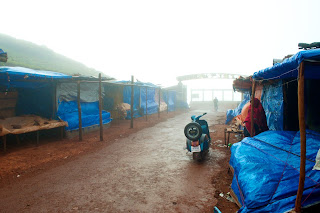 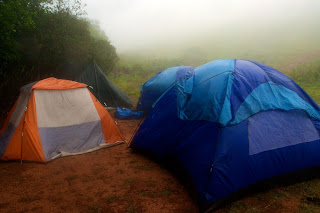 Second day morning we planned for early morning trek and view sunrise from deviramma betta peak, but since last day evening 6PM only the whole place is covered with heavy mist and pretty cold,  so we changed our plan to start after the sunrise as the visibility also very less,  after our tea and breakfast session at the shop we started the trek at around 9AM,  still sun is not visible sometime sun looks like moon because of the heavy mist,  it was very steep descent from manikyadhara and again steep ascent to reach the peak,  after descent we have to take left, it takes us to the different view point,  deviramma betta is one separated hill from the rest of the range, so it gives a very different view of the Ghats,  mist also descents from the range and goes into the plains, the place is very dynamic fight between sun and mist happens here, sometimes full mist sometimes full sunny, i've taken on time lapse to show how the mist falls from the range and goes into the plains.
We spent sometime in the top and trekked back to manikyadhara.  Before we start back to bangalore, we settled the bill in the small shop, can you guess how many tea's we had overall? 110 tea, that explains how cold the place is and how desperate we are to have something hot.

It was full entrainment trip both by the nature and the group.   It was a nice group to spend time with,  almost everyone knows each other and well organized.  Looking forward to explore more with more wild wanderers.