2012 just born, we are nearing the first weekend of the this year, i wanted to go some were on the first weekend.  Hampi and Badami is pending in my list for long time now, so decided to go to one of these places, mailed my friends and we decided to goto Badami.   Badami is nearly 500km from bangalore, so driving is not a good option for a weekend, we decided to go by bus.  KSRTC runs a bus directly to Badami from bangalore called Vaibhav, never heard of this type in KSRTC before, description looked good, so booked the tickets for Myself, Arun and Isma.
Friday Evening myself and Arun started from Indiranagar, Isma planned to join us at Majestic directly.  Our bus Started from majestic at around 8PM, after nearly 11 hours journey, actually it should not taken this time, the coach we have choosen is the problem, KSRTC Vaibhav is not point to point it is meant for connecting remote places, so this bus took some long route and stopped at many places for 5 to 10 mins.  By the time we reached Badami we all are tired tough the bus is semi sleeper but it is little congested compare to regular buses, very less leg space.  As soon as we got down, we enquired is there any other buses available to Bangalore, SRS runs one bus from badami to bangalore we booked in that and canceled the KSRTC viabhav ticket, Vibhav may be good for short distance.

We checked in at KSTDC hotel in Badami, KSTDC is one of the best hotel available in Badami, they have around 16 rooms, we can book the rooms online using kstdc site or call and block the room using the number provided in the site.  It has a restaurant and tourism info center, so food and information need to roam around became easy.  After a small discussion with the guy in info center we sorted out the places.  In Badami there is group of cave temples, The Bhutanatha temple near by lake and around badami Aihole, Pattadakal, Banashankari, Mahakuta.  We decided to go around the places in Badami on 1st day and Aihole, Pattadakal on 2nd day.

First we went Cave temples, these were carved on hill cliff during 6th-7th century.  We thought the place will be less crowded, since it is a normal weekend and new year weekend just passed, so thought not many will turn up but we were wrong, at morning 10AM only cave temple complex is crowed. We got our entry passes and climbed to the first Cave, it is dedicated to Lord Shiva and Planning of four caves is simple. The entrance is a verandah with stone pillars, a distinctive feature of these caves, leading to a columned mandapa – main hall and then to the small square shrine cut deep into the cave. There is one dancing Shiva with 18 arms on the right side entrance of the shiva cave, near by that a teacher was explaining the history and specialties about the statue to a group of school kids. There were many school groups at the cave temple but there are not like this group, they were taking some group photos, singing songs etc.,  It remembered our school days,  History classes, What would have happened if every history class was thought with demonstration like this, may be it would have became our favorite subject or atleast we would have remembered those subject. Spent some time and climbed towards cave 2.

Cave 2 and 3 is dedicated to Lord Vishnu,  cave 2 is Vishnu cave and cave 3 is Maha Vishu cave, wondering why what is the difference between Vishnu and Maha Vishnu? even we had the same doubt. We clarified that doubt by hearing to the session by the same school teacher, In cave 2 only Vishnu sculptures are there so it just Vishnu cave (Bachelor Vishnu ) and in cave 3 Vishnu with Mahalakshmi is there. 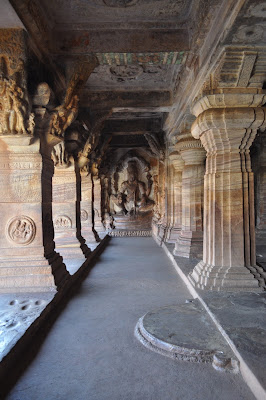 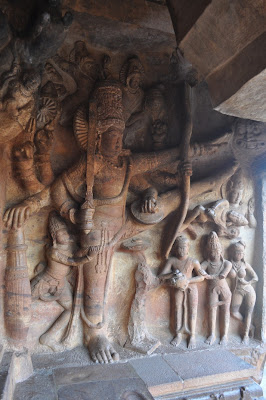 Cave 4 dedicated to Mahavir Jain,  which lies a little east of cave III. The sanctum is adorned by the image of Mahavira.  Scores of Jaina Thirthankara images have been engraved in the inner pillars and walls. In addition to it, there are some idols of Bahubali, Yakshas and Yakshis. Some scholars assign the cave to the 8th century.


Badami cave temples are good example for unity in diversity and in India every divine path is respected equally since ancient days.   Not all sculptures are 100% complete in cave temple may be it was experimental site or the work is disrupted by war between chalukyas and pallavas.   One more thing is cave temples are opened only till 6PM and there is no proper lighting,  from town it look like another dark mountain after 6PM,  it will look good if there is some lighting.

After cave temples we walked to the Bhoothanatha temple by the lake, museum and returned to hotel.  On the we have booked on auto rickshaw for day 2 trip,  auto rickshaw is best mode of travel to aihole and patadakal.

Day 2 to be continued.
Posted by Sivaraj Mathi (சிவராஜ் மதி) at 5:59 PM