My aunt saw this place on one tv channel and she told it to me, i searched for shivaganga on flickr and found one set and the set was very interesting and inspired me to go.  Shivaganga is 1368m above sea level.  I've mailed all my friends, everyone was interested to go shivaganga, we planned a trip in second week of june but one or the other guy was stuck in work or other commitments, so we postponed the trip to next saturday 24th, on saturday also same thing happened we couldn't make it, arun decided we will call everyone who ever is ready at sunday morning 6AM will go to shivaganga.  Sunday morning 6AM only myself and arun were ready, we decided to continue our plan, we both started from indiranagar by arun's apache bike.
We took Palace gorunds->Yeshwantpur-> NH4 Highway path->Nelamangala->Dobbasapete->shivaganga,  after Neelamangala we can take banawadi or Dobbasapete route, since Dobbasapete on NH4 we took that route and shivagana road from Dobbasapete was also in good condition.   We parked the the bike at the bottom of the hill and started our trekking, there is one temple after two hundred steps, we took left from their which led to the peak, After some distance there were two ways, one looked little steep and shortest way to the top.  Trekked for sometime and we took 10 mins rest at one mandapam. We continued our way, there was no steps beyond a point but there was route and it made our life easy,  actually we felt climbing on steps made us more tired than non-steps,  on the way there were many small mandapam and place is full of lush green because of fresh rains, is this what green carpet means? :)  We have reached a place were both the tracks merges (normal and the one we took).  Now we were on the other side of hill and breeze started, it was very pleasant,  We rested for sometime there, clicked few photos and getting ready for the final challenge.  We found a lemmon soda shop near by, we were wondering there is hardly few people here how does he runs the shop and asked the same to owner, he replied saying more people comes to this place, already 11:30AM when people will come? we discussed within ourself. Final phase of the shivaganga is very steep and steps are either too big or it is small carvings on the rock itself.   We put the headphones on and started to climb,  it was very nice experience and no words to explain it, a picture can explain 1000 words better :) 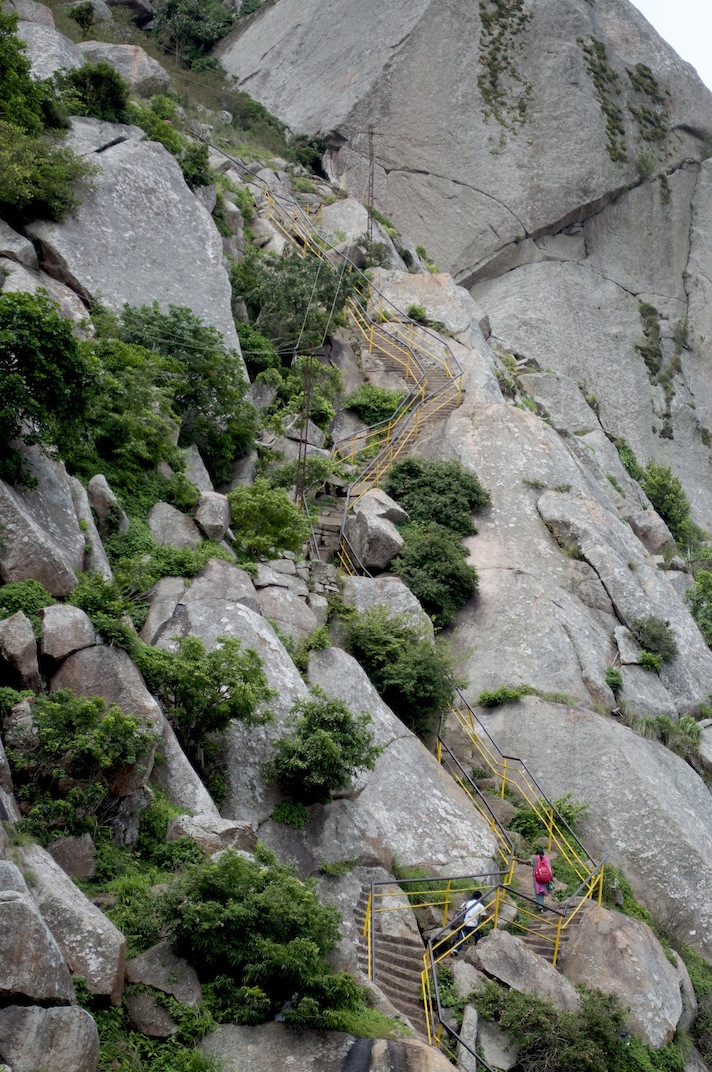 Finally we have reached the top, it is almost touching the clouds, view from there was awesome and wind was very heavy even it can throw a person.  All the mountains around shivaganga was small and rest of places is covered with green or small lakes.   We sat near by the cliff and played some good carnatic songs on my ipod. There were so many monkeys on the top only, i don't know how they know these kind of place, wondered do they have any neural network connection with all trees and nature products like the on Pandora planet ;)  One more big group was at the peak in some sort of uniform, they bought the drums and other instruments, they visited all the gods around and started playing all bajan songs.  Shivagana is good place for trekking and it is also one of the devotional spot in the local, so we saw both sort of crowd there.

Spent sometime and started coming down, we reached the place were the way splits, we have taken the normal route this time, wanted to see who is that path, this time we didn't took any rest and jogging down, on the way down there was one cave temple, that is the reason why most of the crowd is taking this path and this path is longer than the one we took to climb and less scenic. In 60 mins we have reached the bottom and ready to drive back.

Forcing is a way to develop?

Recently Kannada Development Authority recommended state government saying "If you are new to Bangalore and dreaming of settling down here, you will have to pass the Std VII exam in less than one year and prove that you can read and write Kannada."  in order to develop language and to get respect.  While reading this news something stricken my mind of my school days.  In our school system we have to mandatory study few subjects like Chemistry, Physics and Mathematics.  Out of all subjects i had interest only in Mathematics, may be the way it was thought to me created interest or it is that i was able to understand maths better than other subjects, chemistry and physics i had no interest to study but it was forced on me, to goto next grade i have to pass in these subjects too, what i did just before the exams mugged up the books, vomited on the paper and forgot what i mugged up after exam, slowly i started hating the forced subjects though they are good.  After school education i choose mathematics as my specialization in degree which is influenced by my interest and the hate feeling i had toward other subjects because it was forced without try to create interest in it.  I'm pretty sure all us choose our specialization because of the same reason.  Same thing will happen to Kannada also if it is simply forced to learn without making interest.  I've never seen any real movement to create interest in language and culture in the last few years in bangalore.

Blaming the people for showing interest in foreign language is unnecessary, many of us learned foreign language(s) is not by interest it was by necessity to compete with other indians/countries to grab jobs.  Tough i know english, when ever there is possible i give preference to my mother tongue.  One question we should ask ourself is what ever we leaned so far is for knowledge or for job?  That answer will clarify most of our knowledge hunt is driven by need basis not by interest but reading poems, books, religion stuffs are interest driven.   So forcing a language or culture just for its beauty will not work, it should be driven by interest.

Few question to KDA,  Forcing something on peoples of world largest democracy country is democratic? What was done so far to create interest among public to learn the language?

Learning the local language is always helpful but we can't achieve anything by forcing people and it might provoke negative impact.

You can ask creating interest will solve the problem and everyone will learn kannada?  To some extent only, who ever inspired they will not stop at 7th standard and atleast it will not create any negative impact, We can't create interest in language/force it on few people like me :)
Posted by Sivaraj Mathi (சிவராஜ் மதி) at 7:32 PM 1 comment: