Recently i've seen Prabhakaran photo in many public meeting, shops and even in facebook profiles photos by tamilians from India.  We are proud of unity in diversity, we say we have many languages and different cultures but still we are united, non-violence is the power of india after saying all these things, when i see prabhakaran photo on a public meeting it hurts me. Prabhakaran is a separatist, Prabhakaran is the one who wanted independent tamil state by means of violence in srilanka, if these guys support him then why not they will do the same here and demand for separate independent state.  More over he his classified as terrorist in india and He has been issued a death warrant by the Madras High Court in India for plotting the assassination of former Indian Prime Minister Rajiv Gandhi in 1991. For example Respected Tamil Nadu CM Karunanidhi said the following in one interview in 2009 "Prabhakaran is my good friend".
Portraying Prabhakaran in public started two-three years back only even though he his fighting for more than two decades, who ever portray him in TN were they blind before?  Karunanidhi started fast unto death demanding ceasefire in Eelam but he stops fasting after assurance from Indian PM, who never talks to srilankan ministry (even a kid knows the state of central government) but karunanidhi believes his words and call off the fasting before lunch, he just did the fasting show for votes not for people.  It is one of the cheap publicity show in the politics i would say.   Finally LTTE defeated and prabhakaran killed by srilankan army and politicians stopped talking about eelam. Never proposed a plan for administrative sharing between two ethnic groups, never worried about post war crimes and inhumanity acts in eelam and let the srilankan government to do what ever they wanted.

All TN politicians who made use of the crisis in 2008-2009 are really want to help tamil people in srilanka, i doubt it,  they let Mahinda Rajapaksa visit india lately, he entered our land with smile in face after brutally massacred the children and women in elam,  they didn't accuse him for war crime he committed instead they shake hand with Rajapaksa.  Leave Eelam people, what these people do for the TN fisher mens gets killed by srilankan army?  nothing apart from sending a letter to central govt., which has no eyes or ears.  TN government is ready to walk out of central ministry for conflict in election seat sharing but not to protect the people.  All they care about is power not people, they are masters in fooling people and making people blind of truth.
Check out the following photos, prabhakaran photo is publicly portrayed by a political party in Tamilnadu.  Government and police is watching all these and keep the mouth closed, will they keep quite if Paresh Baruah of ULFA photo is portrayed publicly?   never they will arrest and accuse the people but why keep quite for prabhakaran? 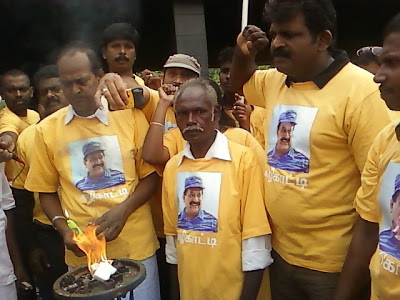 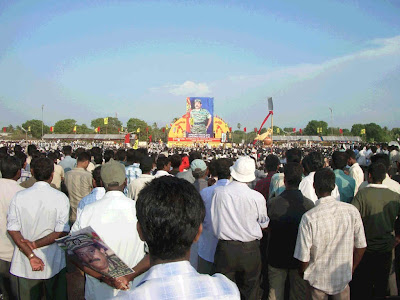 I support saving peoples in eelam and to put full stop to all inhumanity acts but not by supporting cheap politicians or any group who portray Prabhakaran.
Posted by Sivaraj Mathi (சிவராஜ் மதி) at 9:32 PM 4 comments: 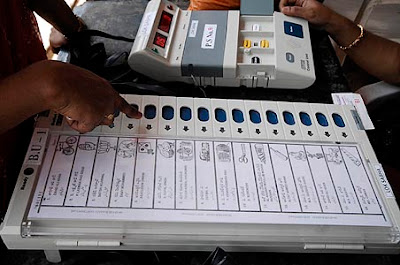