March 5th morning we have started from chennai to Delhi by 7:30AM and reached Delhi around 10am, our plan is to catch the metro to goto new Delhi railway station but unfortunately only terminal 3 has metro station which is seven kms from terminal 1d, so we stick to the original plan pre paid taxi,  few major plus and minuses about Delhi.  Roads were good, traffic is also comparatively decent,
before it shades away we entered new Delhi railway station, OMG! It was worse than any other railway station i've been in india especially platform 1,  poor management and poor people who don't know when to use what service,  we somehow managed to put our luggage's in clock room and went for lunch,  in front of the railway station all thief disguised as hotel owners, don't ever have food without inquiring the rates, though the food is good have to mention that. 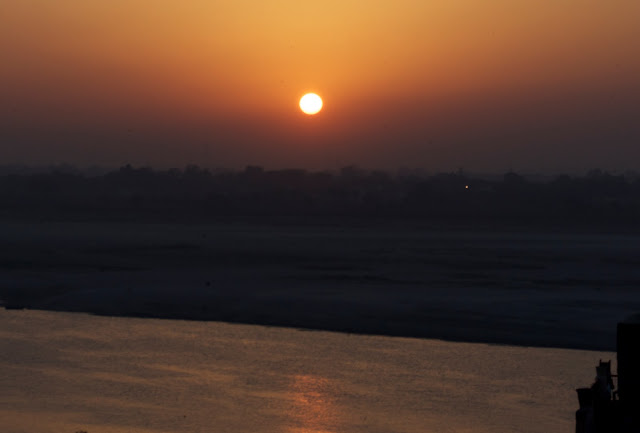 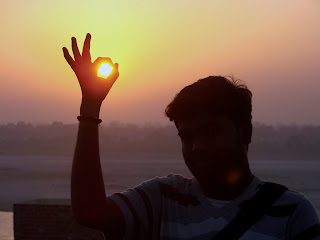 Our train to varanasi started at 1:15pm, we had nap and started chit chat, was checking CWC status mean while,  our train reached Varanasi at 2:30 am, a guy from suraj guest house(near lalit ghat) was waiting in station for us, he arranged our transport to guest house,  I've never seen city like this literally there is no roads towards the end we had to get down from the autorikshaw and walk in the holes,  while walking towards guest house we saw bunch of guards with machine guns standing in that narrow street here and there wondered what is in this road need this much level of security,  after a long walk we have reached the guest house,  guest house and hospitality was better than what we expected after walking in that street, prabhat showed us the Ganges view and few other temples from the roof top and we discussed the plan for next day and went to sleep at 4:30 am,  we are not the only guests in the room there were already 4 rabbits in the room, it was fun playing with them.

March 6: Woke up at 6am went to the terrace for sun rise, it was good and it would have been better if Ganges is full of water,  after sunrise we went Lalit ghat there a boat was waiting for Ganga both on other side and various ghats visit, we took the holy dip and visited harichandra ghat, prayag ghat and manikarnika ghat fom boat. 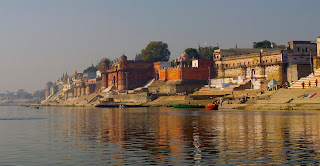 After we had breakfast we hired a shastri he took us to vishwanathar, annapoorani and vishalaktshi temples.  It was a very long and tiring day and ind vs irish match was about to start wanted to goto to room and take rest and watch match but parents suddenly come with one more plan they wanted to goto koudi(gowri)  matha temple, someone told some ritual and they wanted to do it badly, unfortunately no one in Varanasi is aware of that ritual nor the temple, still our parents are not convinced, somehow we got to know it is 4 km form where we are staying and it is closed only till 4 pm, thank god for the 4pm rule it gave us some time to take rest and catch up with the scores,  after some time we have visited gowdi matha temple and came back to lalit ghat to catch our boat for Ganga aarthi, watching Ganga arthi from boat is very pleasant,  along with ganga arthi  we have got know few more twists  in CWC,  after Ganga arthi, myself and Anand Anna went to market steert and had nice samosas and rasagula with that we   thought long day came to end but not, today Varuna ghandhi is getting married in Varanasi so roads might be jammed you should start early and reach railway station by 10pm for train at next day 2am said Prabhu,  we thought thought and decided we will not spend 4hrs in that railway station you know why instead we will take the risk of traffic jam but our fate still continued we have reached the station At 1:30 and the train came 1hr late, at 3am our train started from Varanasi and it reached  haridwar by 5pm.