I wondered why it is written like that, why the name is localized all of a sudden?  i know there are many words like that China is written as seena, 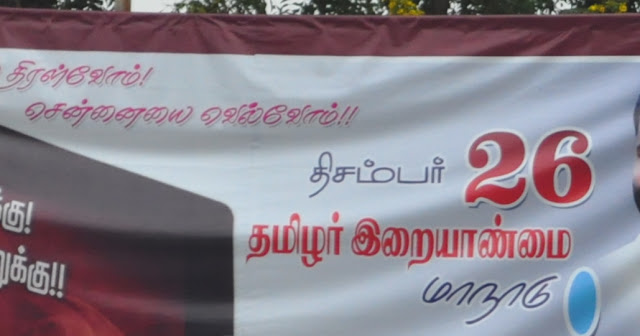 Is this how they save the tamizh?  They have changed the written and pronounce format for January, June, July and December.  I guess it because of Ja, Ju can't be written using tamizh alphabets.  But why did they left February? May be that is why they don't keep this meetings on Feb :)

Leave this localization for sometime,  that title actually interested me, so wanted to know the agenda.  So I searched for Thirumavalan speech in youtube and i found it also,  for first 10 mins he didn't even utter a single word which is related to the title and i couldn't watch it any further.  And also he said "nam vaitha digital bannergalai kizhikirargal"  I don't know from when digital banner become tamizh.  I'm so pity for the people who believe in this kind of stunts.  'Cinema and Dravidian politics' is fading and 'Language and Dravidian' politics rising again?

PS: I'm not against Tamizh, I hate people who use language as a tool for there own gain
Posted by Sivaraj Mathi (சிவராஜ் மதி) at 8:12 PM No comments: