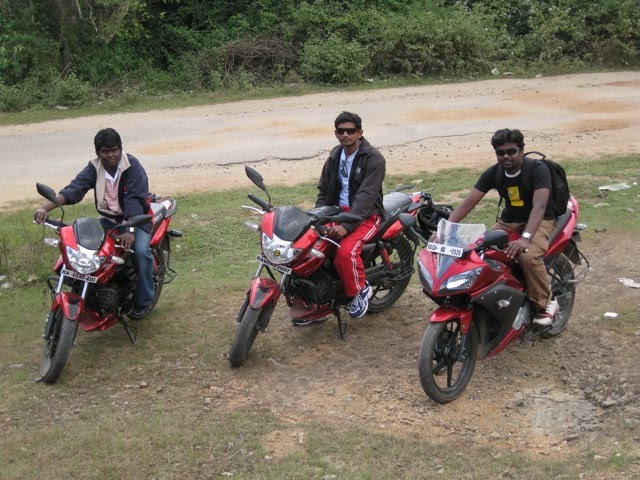 Dec 14 2008: We are bored of this bangalore weekend life wanted to go out some where. We searched the internet for some one day outing and found savanadurga (savanadurga is largest monolith hill in the world ref:wikipedia) it is around 60KM from Indira Nagar, this time we got one more person in our team and a bike too our very own sathish it is. We have started around 5:30AM from Indira Nagar in three bikes myself and Thiyagi in R15, Arun and Sathish in their Apache bikes. We took this path indira nagar-> magadi road-> savanadurga. Sathish just bought his bike still in initial running period so he was drive slowly, myself and arun was tempting by driving above 110KMPH on main roads, we drive for 10 kms and wait for sathish to join us, after sometime sathish forgot about the running period he also started driving fast, that is the way he is. Everything went fine until we took left from magadi road towards savanadurga, few kilometers away from savanadurga the road was not that great so slow downed the speed to 80kmph, still high speed for that road condition, myself and thiyagi realized it in 5 mins. 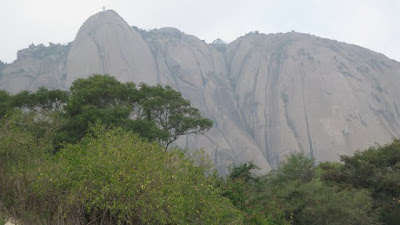 In one right turn our half side of the road was good and other side was bad, one car was coming in the oppside side took our side so we had to get down from the road, i've cut down the speed to 10kmph still off the road was too slipper our bike got skid, next thing i know was myself lying in front of the bike, where is thiyagi? lying even beyond me, just few feet next to him was 20-30 feet depth valley. Arun and Sathish stopped their bikes and come running, i stood up did't even checked what happened to myself or thiyagi went to bike and started checking everything is fine. Sathish went to check what happened to thiyagi, nothing major happened to bike, aaahhhh.

Then only i realized my both hand and leg knees are bleeding lightly and it seemed nothing happened to thiyagi until he removed his sunglass, actually his sunglass cut his nose near eyes, bleeding was not stopping, arun took first aid kit from his bike and starting giving first aid to thiyagi. Someone on the way from local area guided us to a hospital. Two stitches on the cut without any anesthetic, that is what available in that place. All took some rest in that small hospital, here comes the real comedy after all this mess myself and arun wanted to goto savanadurga which is few kms away, thiyagi wants to goto Bangalore by bus not by bike.

Arun and myself somehow convinced thiyagi and again started to savanadurga in bikes :) 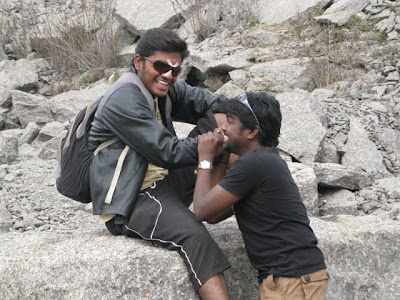 Reached savanadurga, arun said we will go to the starting point of the trek, we went there there was two way to reach the top, one was very steep but short another was not that steep but bit long, arun is very adventures forgot all the words he said before that and started climbing on the first way, following him myself and sathish started, thiyagi shouted and stayed in the foothills and took his favorite phone and dialed the favorite number, reached some distance then realized this is not the way for us. Getting down in that 1st way is pretty difficult and dangerous. Myself and sathish just started climbing as we got down easily, but arun climbed too much distance, he struggled a lot get down see the following very funny video how he got down 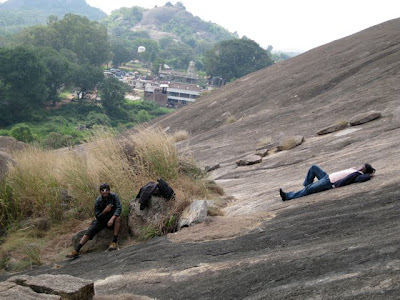 Sathish wanted to accompany thiyagi may be he is scared or he also wanted to dial his favorite number, myself and arun started to climb in the second way we have reached the top by that time all the water bottles we carried was over, there was one small boy selling water and some juices on the top.

Arun: how much is the appy fizz ?
Boy : 30Rs
Arun: in that village it is 10Rs only (showing the village in the foothills from the top)
Boy : go to the village and get it for 10rs 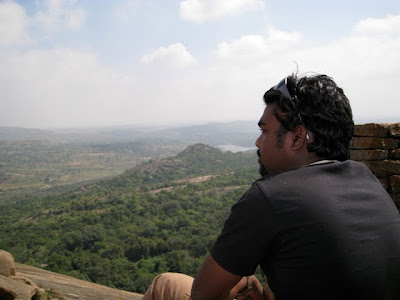 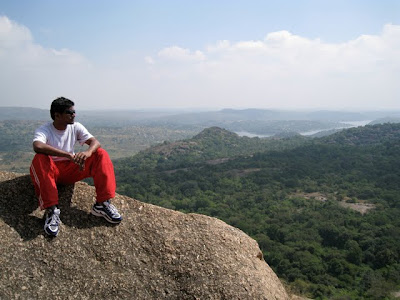 I loved the response from him, we had no choice bought two tetra pack for 60 rs. Enjoyed the scenery around the place and started getting down from the top if we spend more time thiyagi and sathish will kill us, while getting down we were discussing it is very steep no support to hold also, so walk very carefully (put you feet like these, no no like these), suddenly there was one sound 'water!!!', someone was calling for water from the middle of the hill that small boy on the top took one water bottle and started running he crossed us and went to them to sell the water bottle. We were discussing the strategy to get down but that small boy was running on the steep as if it is plain ground. We shut our mouths and stopped discussing the strategies. We had something in the nearby village and started back to bangalore, this time we took some shortcut which leads to BLR-Mysore high way from Savandurga.


Resolutions after the trip 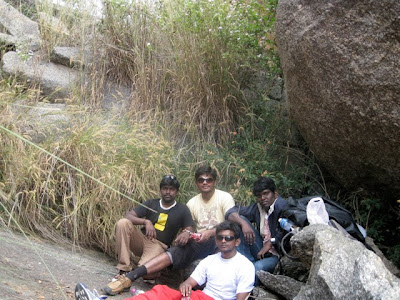